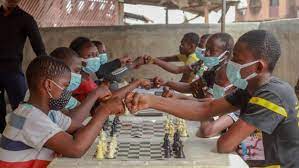 According to the organizers, the competition which will feature over 50 Secondary Schools in Lagos and the Ogun States with about  1,500 athletes, is aimed at fostering the all-round development of students in secondary schools, through fun and interactive games.

Speaking at a media parley to unveil the competition at the weekend, spokesperson for the organizers, Mr. Apo Olugbenga, said the games will help Nigeria to discover its next set of  Champion athletes, adding, ‘’since 2016, PEG has set out on a journey to discover and harness the hidden greatness in each and every one of them, because of the belief that every child is unique in his or her own way and they find expressions through different means.

He disclosed that the students will fight for honours in such interactive games as chess, monopoly, scrabble, Rubik’s cube, and many other games that challenge their reasoning and help them unlock their brainpower.

The past events were greeted with wonderful experiences  by students from Babcock university  secondary school, White Hall schools, Wellspring College, and Lagos African  Church  Grammar School to mention  but a few.’’

‘’This year’s event promises to be bigger and better, as it will attract many other schools. It has been carefully packaged to help the students develop their team spirit through exciting and competitive games’’, he said.

Olugbenga also announced  the games’ partnership with sports 36onja, said ‘’the partnership  is borne out of our aim  to reach 40 per cent of the population  of students  of primary and secondary schools in Nigeria in the next five years.’’

Aso speaking during the media parley, Sports 36onja Online Editor, Mr Ugochim UUzoije said, ‘’This partnership  is borne  out of our aim  to reach 40 per cent of the population of students  of the primary and secondary schools  in Nigeria in the next five years.’’

Anifowose said,’’ the importance of the challenge is to enable secondary schools’ students to crave more interest and develop trending relevant skills in IT, ‘’ which is needed or required to navigate their career as the world is continuously revolving around IT’’.