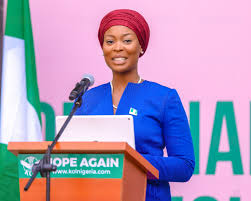 The daughter of former Nigerian Federal Works Commissioner Femi Okunnu has declared her interest to run for President in the 2023 general elections. 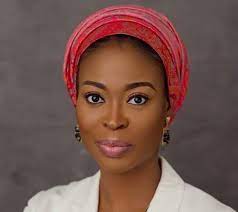 Since the news of her ambition went viral, many people have been reacting. Many people commended her  for her boldness, why others advised her to let go of her ambition because she may not be able  to bear the heat

However, when she was asked why she wanted to contest, the young lady said she has the will to bring about the country that all Nigerians will wish for. She also revealed that she believes that Nigeria can harness its potential to move from a third–world country into a developed nation with innovation and technology.

The feelers that many other women may be influenced cannot be wished away. I can’t remember when last a woman declared interest to run for president.  Many women  out there waiting  for who to blaze the trail  may show interest

If Khadijat eventually emerges as the flag bearer of her party and given the slot to contest, a record would have set that a young woman tangoed with political big wigs in the country for the office of the president that has eluded the women folks in the past.

Who is Khadijat?  Khadijat Okunnu-Lamidi is a 38-year old female Media entrepreneur and a youth development advocate; an active social impact practitioner. She is also an enlightened cosmopolitan professional with a pan-Nigerian outlook. 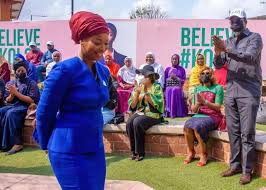 Khadijat is the founder of Slice Media Solutions.  She holds a Bachelor’s Degree in Business Management, from the University of Bolton  and a Master’s Degree in Strategic  Project  Management(MSc)  from Heriot-Watt University

She was born  to a prominent Lagos  family with a legacy of  public services She  is the daughter of Lateef Femi Okunnu (SAN),  a former Federal Commissioner  of Works  and Housing (1967-74), with a record of groundbreaking infrastructural development

Khadijat is married to Adeshola Lamidi, a Financial Analyst and Risk Management Professional and is blessed with children.